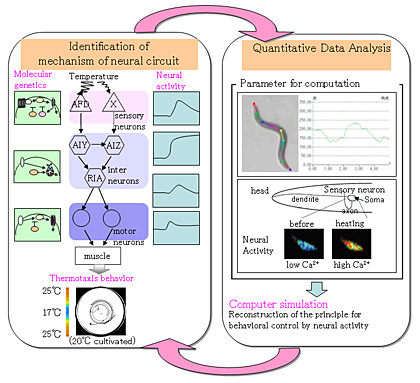 Animals are capable of sensing and remembering a large repertoire of environmental stimuli, and to respond by executing appropriate behaviors. Our laboratory utilizes C. elegans, a small soil nematode species, as a model for understanding the molecular and neural mechanisms of animal behavior.

Humans recognize environmental signals through specialized cells called neurons. For example, odors are received by olfactory neurons in the nasal epithelium, and light is detected by photoreceptor neurons in the retina. Neurons extend processes called axons. The specific zone of an axon is called the synapse, which is connected with the synapses of other axons of other neurons. One might imagine that interconnected neural networks are reminiscent of electrical wiring. These networks are called neural circuits, and their structure can be highly elaborated in cases such as the human brain.

Our laboratory focuses on the behavioral responses of C. elegans to temperature. In our research we aim to elucidate the mechanisms by which animals (1) sense temperature; (2) remember temperature; and (3) associate temperature with feeding state. To study these questions, we are analyzing thermotaxis behavior (Figure 1 left-bottom). After normal cultivation with food at a certain temperature, e.g. 20°C, and placement on a temperature gradient ranging from 17 to 25°C, C. elegans migrates to the cultivation temperature (20°C). We determined the neural circuit essential for this thermotaxis behavior (Figures 1 left-top), isolated several genes required for thermotaxis, and showed that some of these genes are also important for smell and vision in humans. These findings led us to propose a model for thermosensation. We further demonstrated that thermotaxis is the behavioral outcome of associative learning between temperature and feeding. We have identified genes specifically required for the memory-controlled aspect of thermotaxis.

How do genes acting in the neural circuitry generate behavior? How do brains function during cognition, learning, and memory? We are addressing these important issues by conducting systematic optical imaging of neurons in the thermotaxis circuit, as well as applying mathematical modeling of neuronal activities and behavior. Through these studies, we hope to ultimately propose a new paradigm for the dynamics of neural circuits governing learning, memory, and animal behavior.